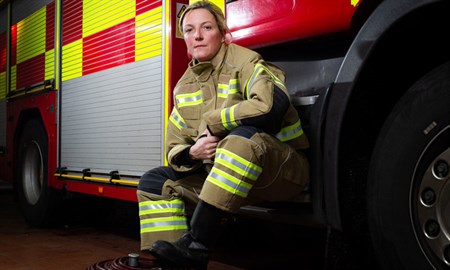 As a firefighter, Debbie McCafferty has been trained to deal with the devastation a blaze can cause.

But no amount of training could prepare her for her first fatality.

It happened in 2002, when a lit cigarette caused flames to rip through a smoker’s home. Smoking is one of the main causes of fire deaths in Scotland.

Debbie, 37, who serves with the Scottish Fire and Rescue Service at Lanark Fire Station, was the one who discovered the male victim’s badly-burned body. Despite having 16 years’ experience in the fire service behind her, this tragic incident is still one that remains in Debbie’s mind.

She said: “I remember the call-out came on the early hours of a winter’s morning. The snow was knee-deep, and we had to make our way to a block of flats in treacherous conditions after reports of a person inside. On arrival, there was no sign of fire – that is very worrying for a firefighter as it means a slow-burning fire over a long period of time.

"When I went in with the crew it was so difficult to see and you lose all your senses, so you have to rely on touch and feel. That’s when I came across a fatality.. my first ever.

“Visibility was so poor I couldn’t even tell at first if it was a man or woman.

“The fire had been caused by smoking and the occupant had fallen asleep,  perhaps under the influence of alcohol, and his cigarette had burned down and down. It was a terrible tragedy – and an avoidable one.

“In many fires, people have also been drinking or taking medication and are sleepy.”

The majority of house fires start in the kitchen and, as the festive season approaches, firefighters are warning of the dangers of cooking while under the influence of alcohol when the risk of accidents or leaving heating pots and pans unattended on the stove or in the oven increases.

Debbie added: “The fact is that for many years cooking has been the main cause of house fires in Scotland.

“In this day and age, it is hard to believe that people still don’t have smoke alarms installed. This is something we can do free of charge through a Home Fire Safety Visit.”

Spreading the fire prevention message is an important part of recently-promoted crew manager Debbie’s job. She assists with the day-to-day running of the watch, arranges training sessions and visits in the community, and still attends 999 calls, so continues to see the “sheer devastation” caused by fire first-hand.

Her main purpose of joining the fire service was to help people, so when the fire and rescue service was recruiting retained firefighters in the Carluke area (Debbie’s hometown), she did not hesitate to apply.

For the next three years she carried a pager while working in a retail role in the town, responding to emergency call-outs as and when required.

Debbie said: “Those three years as a retained firefighter gave me an invaluable insight into the service, and prepared me for becoming a full-time firefighter.”

Flexible shift patterns mean Debbie can still commit to her retained firefighting duties on her days off, in between carrying out free Home Fire Safety Visits, something the fire service regularly does in an effort to reduce the 5500 house fires in Scotland every year.

Shockingly, almost all of those fires are accidental, and most of them preventable, with smoke alarms and a heat detector in the kitchen playing an important role.

As the first ever serious incident she attended as a new recruit was a house fire caused by cooking, she feels particularly strongly about this message.

She recalled: “The fire broke out at a house in the early hours of the morning. We could see the smoke hanging in the air en-route. It was a very sombre atmosphere as we approached, and no one was speaking.

“We received reports of a person inside, but when we got there, they had jumped out of the window to safety and suffered injuries. I was in the BA [breathing apparatus] crew who went in to search the property, and it really sticks in my mind. I was number two, led by a very experienced firefighter. He told me, ‘Stay close and keep low’.

“I remember being hit with this incredible heat as we tried to push the flames back with the line of delivery hose. I thought, ‘This is it, we’re not training now’. There was an element of fear, but you use it to your advantage. This is what we train for, so what we’ve learned kicks in.

“It was another avoidable fire, and we want to make sure everyone is safe in their own home. This is where we need the public’s help.

“Most people who die in house fires are aged 60 and over, and so I would ask if you have a friend, relative or neighbour who could be at risk, please contact us to arrange a free safety visit.” 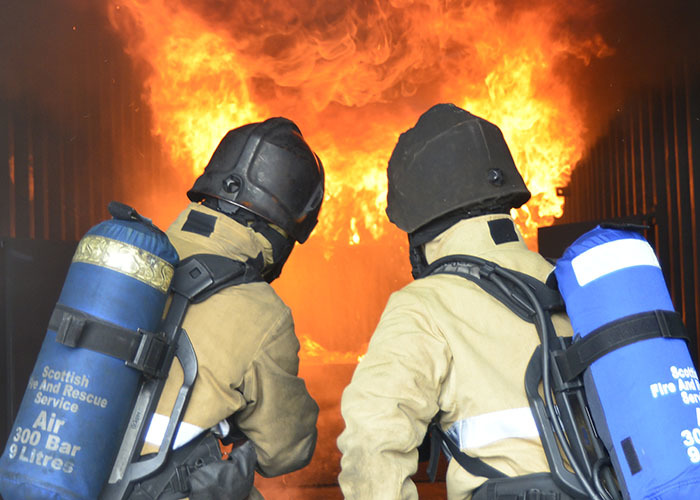 To stay safe in the kitchen, here are a few essential tips from firefighters..

Article was originally published by the Sunday Post on November 18.