Footballer-turned-firefighter, Donna James, on her love of the job…

“If there is someone in the burning building, we will risk our lives to save them” 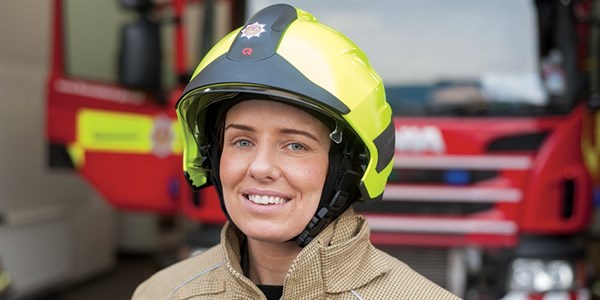 Like all her colleagues in Scottish Fire and Rescue Service, Firefighter Donna James risks her life to save others on an almost-daily basis.

With 10 years’ service under her belt, Donna has attended numerous fires in Glasgow, but was inspired to join the fire service following a house fire at her own family home.

She recalled: “My mum put a lit cigarette in the bin by accident and it caught fire but when the fire service attended, a female firefighter was among them. That inspired me. I thought ‘If she can do that as a career, so could I’. Six years later, she ended up being my gaffer – and she remembered the fire.”

Since attending her first call-out in 2008, Donna hasn’t looked back. From the very beginning she felt part of the team – or firefighting family.

Donna insisted: “We all look after each other, but as in any career, you have to prove yourself, whether you are male or female. I am more than capable of doing it. I certainly have never felt excluded or at a disadvantage.” 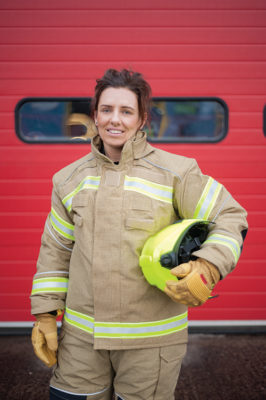 Donna, 34, is used to working as part of a team – she played professional football for Scotland in her early 20s. In 2010, she was described as “one of Scotland’s greatest ever talents”. Though no longer playing for the national team, Donna still enjoys five-a-side with colleagues.

The former footballer gets a surge of adrenaline every time the alarm is raised, but she will never forget her first turn-out.

Donna, from Maryhill, explained: “My heart felt as if it was pumping out my chest on my first call. You think, ‘Have I learnt enough?’ Then you remember you have got your colleagues there with you who are more experienced. Even though we train for it, going into a burning building is still terrifying for us.

“The heat is unbearable – it’s like when you open your oven door and you pull your face away, only 10 times hotter. It’s phenomenal; around 900°C sometimes, so hot helmets have melted.

“If there is someone to be saved in a building, we will risk our lives to save them.”

Every fire is treated the same; from massive blazes at commercial properties to smaller house fires which Donna sees all too frequently.

In Scotland each year there are around 5,500 house fires, almost all are accidental and most of them preventable.

Having worked for nine years as an Operational Firefighter, Donna has moved to a new role as a Community Firefighter where the emphasis is on fire prevention.

She added: “The fact is that for many years, cooking has been the main cause of house fires in Scotland. Very often it is when people are tired, or under the influence of alcohol that fires start – when people forget they’ve put food on and fall asleep. My advice is, if you have a drink, grab something on your way home, don’t cook.

“You can also take simple steps to keep you and your family safe. Smoke alarms are essential to alert you and allow you to escape safely. Fitting a heat alarm in your kitchen can also give you early warning if a fire does start when cooking.”

While cooking causes most house fires, smoking is the main cause of fire deaths.

Donna continued: “We encourage people to take smoking outside the home where possible. You remove the risk of falling asleep with a lit cigarette and passive smoking. In many fires started by cigarettes, people have also been drinking and are sleepy.”

In a bid to drive home the prevention message, Donna and her colleagues conduct free Home Fire Safety Visits.

She said: “We can fit smoke alarms too. But this is where we need people’s help. Most people who die in house fires are aged 60 and over. Have you got a friend, relative or neighbour who could be at risk? If the answer is yes, contact us today.

“Doing the community-based stuff gives you a true appreciation of what you have.

“Being in the fire service has changed me. I feel that, as a female firefighter, I have a purpose in life.”

For a free SFRS Home Fire Safety Visit and to have a smoke alarm fitted: