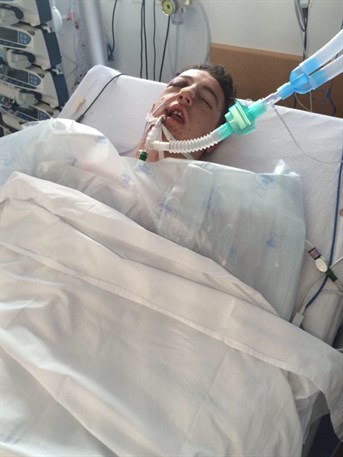 A fire chief has spoken of the devastating moment his son was left clinging to life following a horror road smash – and cautioned others to drive safely this winter.

Veteran firefighter Jim Scott had already made it his mission to educate people about the dangers after attending numerous road traffic collisions over his 29 year career.

He worked through some of the most challenging conditions to free casualties from wreckages and get them to safety, and he also had to endure fatal incidents.

But nothing could have prepared him for the news he received on October 23, 2015.

That was the day that the dad-of-two received a phone call telling him his teenage son, Adam, had sustained life-threatening injuries after crashing his motorbike.

Reflecting back, Jim – who is the Scottish Fire and Rescue Service’s Local Senior Officer for Ayrshire - recalled: “The time and date are stamped into my head.

“October 23 at twenty two minutes past four - that’s the time I took a call to say my son had been involved in a serious road traffic collision and had sustained life-threatening injuries.

“I remember I was in the office when I got the call and had just gone back upstairs after area headquarter staff had hosted a charity fundraiser.

“My first thought was: ‘Is this really Adam - has it really happened to him?' as he was meant to be at work." 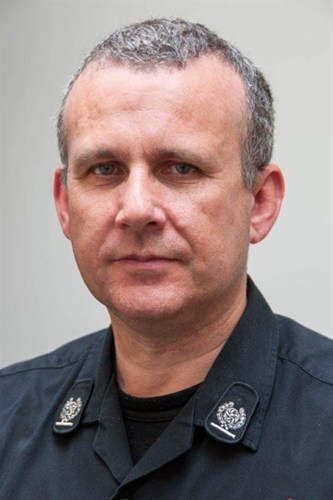 While attempting a corner during a break from work, Adam’s bike left the road, leading to him colliding with a metal pole.

The seventeen-year-old’s injuries were severe and he was rushed to Ayrshire’s Crosshouse Hospital, where he was placed into an induced coma – leaving his father heart-broken.

Experienced officer Jim, 52, revealed: “I’ve attended numerous accidents and seen all forms of trauma, but to see your own flesh and blood lying there … nothing can prepare you for that.

“I’ve witnessed families being told about their loved ones, but when it’s one of your own …”

He continued: “Adam had a diffuse brain injury because of the impact of the accident.

“He had been going round a bend when it happened. The police confirmed he hadn’t been travelling too fast, but his bike left the road and his head collided with a metal pole.

“This rendered him unconscious. He also suffered a punctured lung, broken jaw and a fractured eye socket.”

Adam was eventually transported to Glasgow’s Queen Elizabeth University Hospital to be assessed by specialists.

The teenager’s sedation was lifted to bring him out of his induced coma, but his condition failed to improve.

Grandfather-of-one Jim, who lives in South Ayrshire, explained: “The specialists became extremely concerned because Adam wasn’t responding once they had lifted the sedation.

“He wasn’t showing any signs of coming out his coma – and there was significant concern for his medical condition. 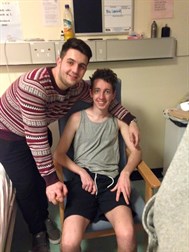 “That was the state-of-play for a couple of weeks. He was effectively being kept alive by machines, then remained in a coma when he was eventually taken off his ventilator.”

But, after a month of hell, the family was stunned when Adam miraculously pulled through.

Jim revealed: “Myself and Adam’s brother, Cameron, went to see him one day and I can still vividly recall what happened.

He added: “We couldn’t believe it. I’ll never forget that moment – I wasn’t sure if I would ever hear my son’s voice again before that.”

Despite Adam’s progress, the extent of the damage caused by the crash remained unclear.

In an effort to help spark a recovery, Jim and others placed family photos around Adam’s room to try and stimulate his brain. He was eventually able to pinpoint most names.

And, while he still had to undergo extensive physical therapy, Adam eventually progressed enough to be released from hospital – a few days before Christmas.

Describing Adam’s release as “the best Christmas gift ever”, Jim said: “Getting Adam home a few days before Christmas was massive for the family.

“Six weeks before that we didn’t know if we would have a funeral to deal with and now we were celebrating Christmas together.

“I’m very proud, but I also feel fortunate, and a bit guilty. I’ve got my son back, but I know only too well that there are others out there who aren’t so lucky  - and I saw this during our daily trips to hospital.“ 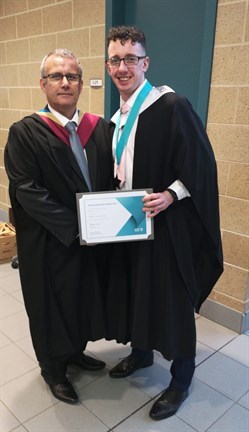 Since his release Adam has excelled both academically and professionally. And now, aged 20, he dreams of becoming a fitness coach, and recently collected his HND from Ayrshire College.

Three years on from the most traumatic experience of his life, Jim is eternally grateful to the medical staff who helped care for his son.

He also pays tribute to Ayrshire College and its principal, Heather Dunk, who supported Adam to complete his studies.

However, special thanks is reserved for the Scottish Fire and Rescue Service and its staff, who ensured Jim and his family were cared for in his time of need.

He said: “The biggest thing that got me through that period was my other family … my fire service family.

“I don’t think I’ve ever been so proud to work for the SFRS when people reached out in my darkest hour. The support was immense from close friends and colleagues - including those from the Strategic Leadership Team.

“The Service’s chaplaincy, Reverend Gordon Armstrong and Father Jim Thomson, came to visit me in the hospital and I’ll be forever grateful to them.

“We face daily challenges and demands in this Service, but the one thing which endures is the fire service family spirit.”

He is now using his own experience to reach out even further than before to stress the serious importance of road safety.

He’s also determined to shine a light on the importance of initiatives like Biker Down, which equips motorcyclists with potentially-life saving skills and guidance.

Jim explained: “Adam was out with a work colleague when the accident happened and I think that colleague saved Adam’s life.

“He was ahead of Adam and spun back when he saw what happened. He called for help and maintained Adam’s breathing till the ambulance arrived.

“That’s why courses like Biker Down are so important. I would encourage everyone to acquire the life-saving skills these courses offer.

“You never know when these skills can be used.”

While his working life has shown him that not every story has a happy ending, Adam’s ordeal has left Jim determined to make the most of each and every day.

He revealed: “It’s shown me that in your darkest hour, there is always hope.

“There was definitely someone looking over Adam that day. You only get one life and you need to make the most of it ...”

For more information on how to stay safe on Scotland’s roads visit www.firescotland.gov.uk/your-safety/road-safety.aspx