One In One Out: Hero dad retires from duty as son steps up to the mark

Kobi will join the SFRS family on the day dad, Terry, retires.

A long-serving firefighter will step down from his role - on the same day his son enters the Scottish Fire and Rescue Service.

The dedicated emergency service worker has spent more than a quarter of a century protecting communities - and working to rescue people at disaster sites around the world.

And in an incredible twist of fate, Terry’s retirement coincides with his son, Kobi, entering the Service – right down to the same day.

Terry, 50, revealed: “It’s quite coincidental how it’s all worked out and to say that I am proud of Kobi would be a massive understatement.

“My last day was supposed to be April 13, but that is the day Kobi passes out, so I had to get my last shift covered.

The veteran was mobilised and dispatched to use his skills at disasters such as 2011’s deadly earthquake in Christchurch, New Zealand which sadly claimed the lives of 185 people.

Terry said: “A lot of the time it was urban search and rescue work we did – trying to locate people in the most desperate of circumstances. It was really rewarding work to help locate those people and get them to a place of safety.

“I did attend at Christchurch as part of a highly co-ordinated international response but was also mobilised across Scotland including to the Stockline gas explosion in Glasgow in 2004 where nine people very sadly perished.

“We do work in a dynamic environment - one minute you were on your normal watch and then you would get a call to attend at an earthquake on the other side of the world.

“But we are trained, we are equipped – and we are always ready to respond.”

Terry’s specialist urban search and rescue skills are vital for responding to other types of major incident including terror attacks.

The SFRS is currently proposing to transform to train and equip firefighters to respond safely to such events as well as severe weather related flooding and emergency medical response.

It has launched a public consultation – called ‘Your Service … Your Voice’ – to gather public opinion.

Kobi and his fellow new recruits could be in a position to do even more for the people of Scotland.

He has been training hard at the SFRS’s National Training Centre in Cambuslang and spoke about how he is also looking forward to carrying out prevention work.

This effort has seen the total number of fires across Scotland reduce by 40 per cent compared to 10 years ago.

Kobi said: “There is no doubt that becoming a firefighter just like my dad is something I’ve always wanted to do.

“It’s exciting because it’s not just about fighting fires, there’s lots of different areas to the job. 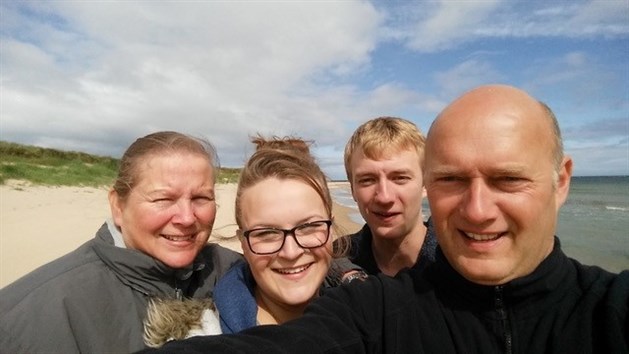 “This means my final shift is now April 12 - which strangely enough is Kobi’s birthday – so it is a time of great celebration for our family.”

Stunned Kobi added: “My dad retires on the day I pass out - the timing is just crazy.

“But I am so proud to be following in his footsteps at a truly exciting time for the Scottish Fire and Rescue Service, and the potential is incredible.”

Terry became a wholetime firefighter in 1992 and has since worked to protect communities across Scotland and throughout the world - thanks to his specialised urban search and rescue skills.