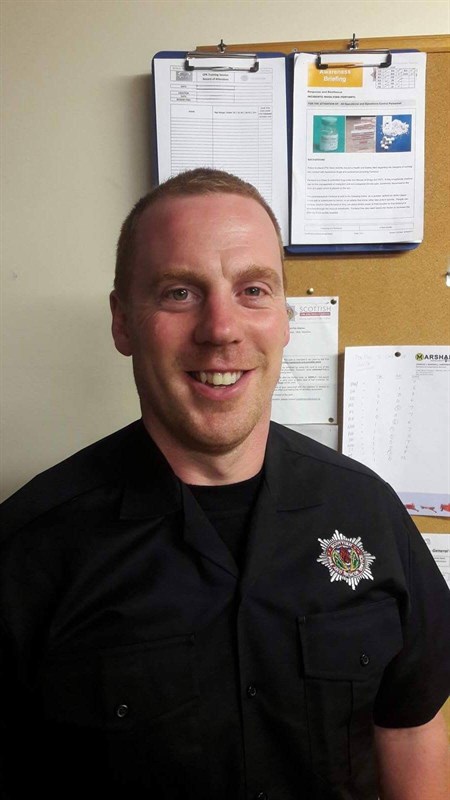 A FORMER whole-time firefighter has pulled on his uniform once again after joining the retained service.

Liam Robertson left Scotland for the Middle East almost four years ago, having previously served as a crew manager in the former Central Scotland legacy service.

However, after returning to Scotland and settling down in Orkney, Liam couldn’t resist the lure of once again working as part of a close-knit team in the Scottish Fire and Rescue Service.

The dad-of-one one who is married to Jacqui, was told the SFRS was recruiting on the islands – and the service’s new recruits courses at Kirkwall were the deciding factor.

Liam, 37, said: “Just over six months ago our daughter Isabelle arrived – there is no way that I would have been able to take the two weeks out to fly to Aberdeen.

“In all honesty, the new courses being held on the island was very much a deciding factor for me – I can stay close to my family and young baby and I have just started a new business which is taking up a lot of my time.

“The course itself surprised me with how comprehensive it was – the trainers were fantastic.

“The retained firefighter role fits well with what is happening in my life and I get to give something back to the community.”

Liam set up his own health and safety consultancy firm and fire extinguisher servicing company after returning to the UK last year.

He previously served at stations across central Scotland as a station manager, including Bo’ness, Larbert and stations in Edinburgh.

While in the Middle East he was manager of an emergency responder team in Abu Dhabi, in charge of a team comprising more than ten different nationalities.

He now lives near Kirkwall, with Jacqui, 37, and Isabelle.

And as a former fulltime firefighter, he has a unique insight in to what it takes to be an RDS firefighter.

He said: “The level of professionalism and discipline is right up there with the fulltime crews.

“At the end of the day the retained service attracts a certain type of person and all of the people that I have been through the course with have been practical, capable and hardworking people - just brilliant to work with.

“One of the reasons becoming an RDS firefighter appealed to me so much was because I missed the teamwork and camaraderie.

“You get to do and see things that you never would be able to in everyday life or in any other line of work.”

Liam admits that he is also keen to ensure the skills and qualifications he earned as a firefighter remain fresh, and becoming a retained firefighter has given him the tools to do that.

He added: “If anyone is on the fence about becoming an RDS firefighter, I would urge you to just dive in – you pick up so many skills and talents along the way.

“And it never takes up as much time as you expect it to.”

Anyone can arrange a free Home Fire Safety Visit by calling SFRS on the free phone number 0800 073 1999, by texting ‘FIRE’ to 80800 or by filling in a form at www.firescotland.gov.uk