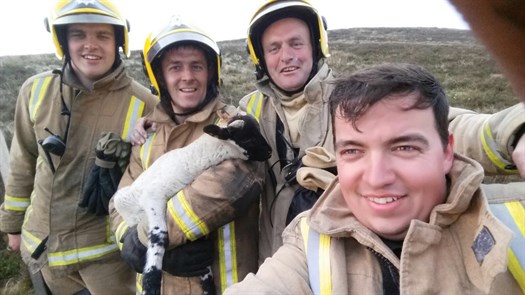 Firefighters rescued a stricken lamb from the aftermath of a wildfire – and helped cool it down with a bottle of water.

The retained crew had worked hard to extinguish the blaze that had taken hold of five square miles across the remote hills of Inverclyde on Friday, May 12.

Neil Goldie, Willie McColl, Lloyd Baillie and Phil Moir were returning to their appliance when they heard the lamb’s cries and went to the rescue.

The touching image of the crew – based at the Scottish Fire and Rescue Service’s Skelmorlie station in Ayrshire – was taken by Neil Goldie.

His colleague, Phil Moir, said: “We had a lengthy hike to get to the fire which we attacked with beaters. It was a challenging environment but we had to move quickly because it was windy and this can help the flames to spread.

“We worked as a team and it was extinguished but while returning to the appliance we spotted the lamb in a patch of burnt ground so we scooped it up and gave it some water.

“It did appear to have suffered some burns, so we carried it down off the moor and took it to the nearby farm.

“The Scottish Fire and Rescue Service is a humanitarian and compassionate organisation and firefighters always seeks to save and preserve life - and that includes this little lamb.

“We were delighted to be able to go that extra mile.”

Ayrshire fire chief James Scott hailed the hard work of firefighters through a period of hot and dry weather.

But he also issued a stark warning to communities to be mindful to the effects of wildfires.

He said: “These fires can have a devastating impact on our natural environment, wildlife and indeed livestock.

“Many of these incidents may be accidental in origin – through careless disposal of a cigarette, barbecues and campfires for example.

“Unfortunately there are a number of incidents that are deliberate in nature and I would urge the public to report any incidents of deliberate fire raising to Police Scotland.

“I would like to commend the hard work and commitment of our crews who have responded to a number of wildfire incidents recently and have worked tirelessly to protect their communities.” 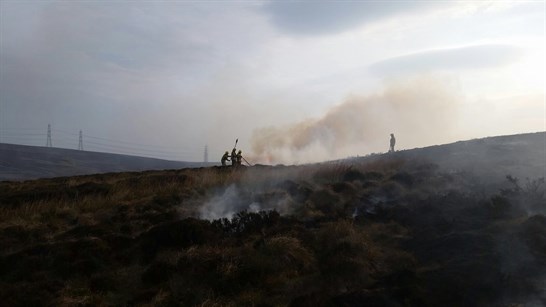 For further advice and information about wildfires and how to prevent them - http://www.outdooraccess-scotland.com