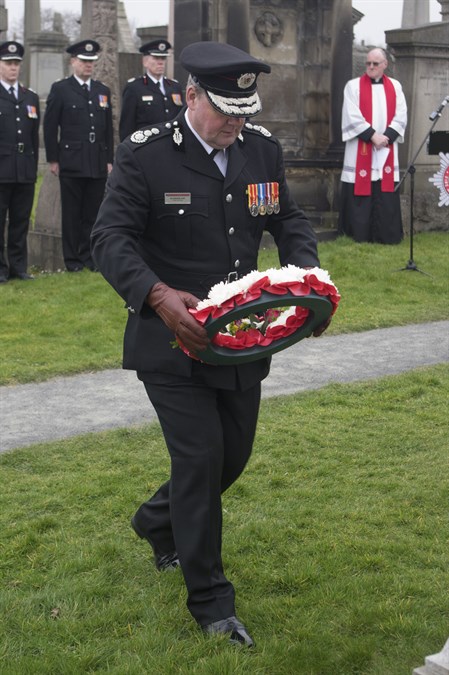 Today marks the anniversary of the Cheapside disaster that claimed the lives of 19 firefighters in Glasgow in 1960.

A memorial service was held at the city’s Necropolis to remember those who made the ultimate sacrifice.

It was the largest loss of life ever suffered by a British fire service during peacetime.

On the evening of 28 March that year, a fire tore through a whisky bond resulting in an explosion which caused its 60 foot walls crashing to the street below.

A total of fourteen Glasgow Fire Service and five Glasgow Salvage Corps members were killed as they worked to protect the public from the blaze.

Chief Officer Alasdair Hay told those at the memorial on Tuesday, 28 March: “We are here today to pay tribute to the 19 brave firefighters who gave their lives to protect the people of Glasgow.

“These men were also devoted fathers, husbands, brothers and sons.

“The memories they have left their loved ones with will last a lifetime.”

Chief Officer Hay added: “Firefighters are prepared to enter some of the most challenging environments every day in order to protect the public from harm.

“The loss at Cheapside Street was catastrophic and continues to resonate to this day, the spirit and bravery of these firefighters will never be forgotten.

“They are a proud part of our history and our thoughts will always be with their families.”