The awards, presented by the First Minister, took place at Edinburgh Castle

Six Scottish Fire and Rescue Service staff were recognised for acts of bravery at the Brave@Heart award ceremony.

The awards were presented by the First Minister at a special event held at Edinburgh Castle last night, Tuesday 4 October.

Initiated by the Scottish Government in 2010 to recognise heroic actions, the recipients of the prestigious awards are chosen by an independent panel following nominations from the blue-light emergency services and other rescue organisations.

The winners from The Scottish Fire and Rescue Service were: 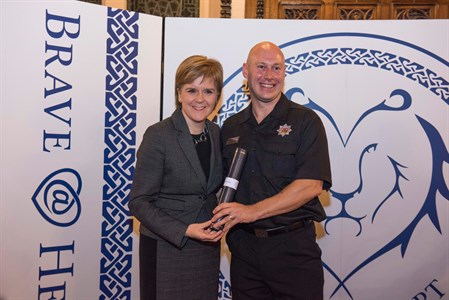 While competing in a triathlon, at Lochore Country Park, Lochgelly Andrew Fish came across a fellow competitor who had taken seriously ill during the swimming section of the event.  He very quickly established the severity of the situation and immediately summoned the assistance of safety kayak and nearby motor powered safety boat whilst attempting to maintain the casualty's airway in the water and re-direct other competitors away from the scene. Once the casualty was on the safety boat Andrew began to administer first aid. As they approached the shore he summoned further help and began to remove the casualty's wetsuit and perform CPR. He continued to assist with CPR until the arrival of the Scottish Ambulance Service. 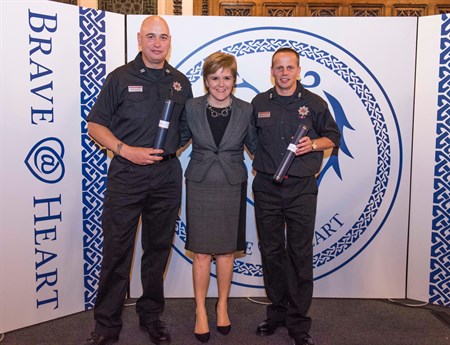 On 30 December, a fire appliance was dispatched to a sheltered housing complex in Aberdeen to find the lower ground floor flooded with 12-18 inches of water. While most of the residents had been evacuated, the warden informed the crew that three elderly women remained in their flats, which were in imminent danger of flooding. In the first flat they found and elderly lady, with a walking frame, standing up to her knees in rising water, shivering and cold. In the second flat they found another elderly lady with water at mid-thigh height. Without any equipment they had to force entry into the third flat where they found an elderly female resident in bed with water rising around her. They managed to lift all three elderly ladies to safety. As they reached the ground floor there was a loud crash, the final exit doors failed and the lower ground floor and flats flooded to the depth of about five feet.

Off duty Watch Manager David Bryceland was watching a game of football, in Millport, when a goalkeeper became ill and unexpectedly fell to the ground.  David quickly went to the man’s aid and performed CPR for approximately 15 minutes until an ambulance arrived. The crew applied a defibrillator to the unconscious male and he was revived.  Without David's intervention with CPR the person’s chances of survival would have been extremely low. 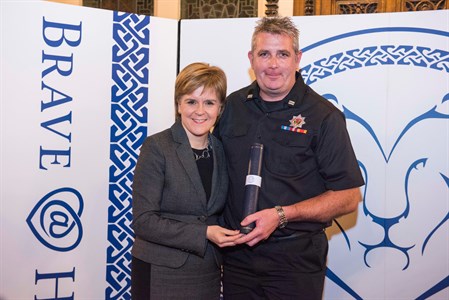 Off duty Firefighter, Mark Poe was recovering at home in Ullapool from serious injuries sustained during a work-related road traffic collision when he was alerted to a local house fire.  Despite his physically limiting injuries, he alerted the Scottish Fire and Rescue Service and made his way to the property.  Knowing there was an elderly occupier in the house; he forced his way into the property to attempt a rescue, but was beaten back by the heat and smoke.  Despite his injuries and exposure to the heat and smoke he remained on scene to assist his retained crew. 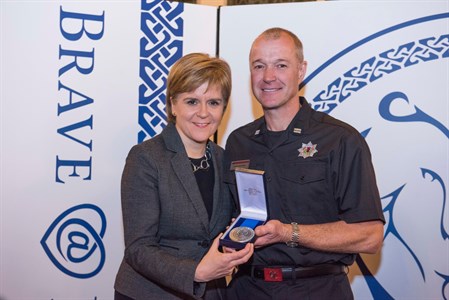 Geoff Maxwell (Also a St. Andrew’s Award winner which is awarded for exceptional acts of bravery)

Retained Fire fighter Geoff Maxwell was working, in his primary job role as a joiner, next to the River Esk when he heard cries for help.  On investigation, he saw a young girl in the water, being kept afloat by her father. Without consideration for his own safety, Mr Maxwell immediately dived into the fast moving water and swam 12 meters to the area where he had last seen the girl, who had by now disappeared under the water. By moving his hands below the water he managed to touch the girls head and drag her back above the surface by the hair. Holding the girl, Mr Maxwell then attempted to swim back to the bank, but found himself struggling due to strong undercurrents.  Just when he thought that they weren't going to make it, the young girl began to panic and grabbed him around the neck, thereby freeing his arms and allowing them to swim to safety. Once they were both out of the water, Mr Maxwell continued to assist with the search for the girl’s father by directing appliances to the correct location where he had last seen her dad.  Tragically, the father’s body was recovered from the river the following day.