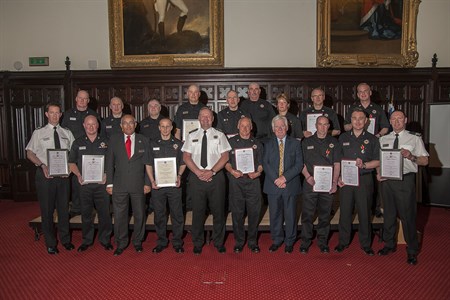 The courage and bravery shown by firefighters from across the north of Scotland in their response to Storm Frank has been hailed at an awards ceremony in Aberdeen last night.

Ballater Fire Station and its firefighters, who fought tirelessly to protect their community from flooding despite their own station bearing the brunt of the storms, received a Chief Officer Commendation award to enthusiastic applause from the assembled guests.

Two firefighters from North Anderson Drive in Aberdeen were also commended for their involvement in the evacuation of a sheltered care home in the Bridge of Dee. Crew Manager Dennis Chalmers and firefighter Christopher McAllister waded through rising flood waters to rescue three elderly people and carry them to safety on December 30th 2015.

Another 11 SFRS personnel were honoured with long service and good conduct awards and 30 year certificates during the awards ceremony at the Town & County Hall on Union Street.

Chief Officer Alasdair Hay, who was there to personally congratulate the winners, said the awards were a great way to shed light on the fantastic work being done by our firefighters around Scotland.

He said: “The Scottish Fire and Rescue Service response to Storm Frank – which affected all parts of the country – truly exemplified our commitment to providing a first class emergency service to our communities.

“Our firefighters are, quite rightly, praised for their abilities at fighting fires but the efforts of the Ballater crews and those from North Anderson Drive show that our capabilities extend far beyond that.

“The unprecedented conditions the country suffered during the winter period threw up a wide variety of different and unique challenges for our firefighters to contend with. What followed was a truly national response, as we focused our best resources from around Scotland to the worst hit areas.

“It gives me great pleasure and pride to formally highlight some of the firefighters who demonstrated that service-wide determination to do what was best for the people of Scotland.”

During Storm Frank the crews from Ballater Station were helping flood victims before the station flooded and required the crew to move their appliances to higher ground so it was available to protect the local communities and return to active duty.

Despite the houses of seven of the local Ballater crew members also being badly affected by flooding; it was only after assisting members of their community did they return to their own homes.

Aberdeenshire and Moray Station Manager Colin Westwood said: “It gives me a great sense of pride that the personnel from Ballater are being recognised for their actions during Storm Frank.

"At the height of the flooding many of the local firefighter’s homes and properties were severely affected however the crews continued to undertake their rescue operations with little or no regard for their own loss with their sole and unselfish focus being on responding and supporting their community.

Dennis Chalmers and Christopher McAllister were equally delighted to pick up their commendations. Their actions during Storm Frank were described as ‘professional and selfless’ by their Station Manager at North Anderson Drive, Charlie Watt.

He said: “I am delighted and extremely proud that Dennis and Chris are being recognised by the Service for their actions at this incident under extremely challenging conditions.

“They are both valuable members at North Anderson Drive fire station and comes as no great surprise to me of their professional and selfless actions on that evening. They are a credit to their station and their colleagues within Aberdeen City and also the wider Aberdeenshire area.”