Firefighters are working with bikers to reduce the number of motorcyclists killed or injured on Scotland’s roads.

Scottish Fire and Rescue Service (SFRS) crews regularly respond to serious collisions knowing those on two wheels are by far the most likely to be involved in a tragedy.

As many riders travel in pairs or groups a fellow biker is often the first person on scene following an incident involving a motorcycle.

In a pilot project firefighters in Argyll and Bute, Edinburgh and North Lanarkshire are running Biker Down courses, giving riders potentially life-saving skills to help them make the scene of a collision safe and protect a casualty.

His team of volunteers – all firefighters and members of the SFRS Bikers Section – has delivered numerous courses over the past year.

Their efforts have been bolstered with crews at Oban and South Queensferry also now delivering the courses.

Hundreds of motorcyclists from across Scotland have taken part, with the firefighters sharing their experience of attending serious road traffic collisions to make them aware of the dangers that face casualties and those coming to their aid.

Area Manager Iain McCusker, the local senior officer for North Lanarkshire, said: “Motorcyclists are around 38 times more likely to be killed than people in cars, because a collision that would barely damage a vehicle could easily claim a biker’s life.

“Our crews are all too familiar with the devastating aftermath of incidents on the roads.

“Firefighters are often needed to help people who are trapped and injured following a crash, but sadly there are times when their specialist rescue skills just aren’t enough.”

He continued:  “Biker Down isn’t about lecturing riders on the consequences of things going wrong – it’s about equipping them to make a difference if they encounter an emergency.

“If someone there when a crash happens has the skills to manage the scene and provide first aid it could save a life.”

Participants learn ways of making a scene safe, first aid appropriate to common types of injury and how to safely remove a helmet.

The course also helps bikers make it less likely they will become a casualty by covering ways those on two wheels can get noticed by other road users.

He said: “Every day around 30 bikers come to harm on Britain’s roads.

“Biker Down gives an insight to what it’s like at the scene of an incident and what steps can be taken to help prevent them becoming tragedies.

“Learning some basic first person on scene techniques could make all the difference and keep a casualty alive until specialist medical helps gets to them.

“The course is designed by bikers for bikers and we want people to get in touch if they are interested in taking part.”

Courses are currently scheduled to run in Motherwell on Saturday 13 August and in Oban on Sunday 14 and Sunday 28 August.

Dates are yet to be confirmed for the next course in South Queensferry.

Firefighter Branney said: “Our advice for motorcyclists is always to anticipate the actions of others, make sure they could slow down and safely stop if the unexpected happens, and to position their bike in the safest place to maximise their visibility.

“They should always take a 'lifesaver' glance over their shoulder before carrying out manoeuvres, so they know where others are and what they’re doing.

“Because bikers are particularly vulnerable we also need drivers of other vehicles to ‘Think Bike’ and carefully look for motorcyclists, especially at junctions, when changing lanes or turning in the road.”

More information on the courses is available by visiting the ‘Biker Down Scotland’ Facebook page: www.facebook.com/Biker-Down-Scotland-100598230291251/. 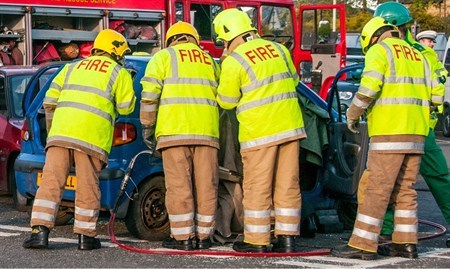 SFRS firefighters take part in a road rescue exercise along with paramedics and police officers. 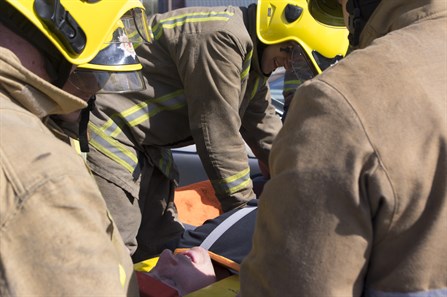 SFRS firefighters assist a 'casualty' in a training exercise. 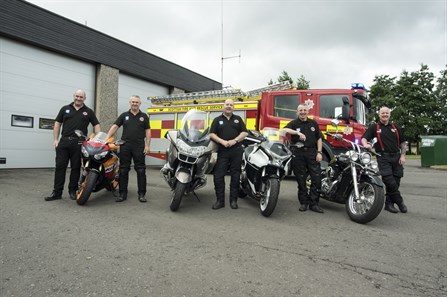 Members of the SFRS Bikers Section who deliver the Biker Down courses.