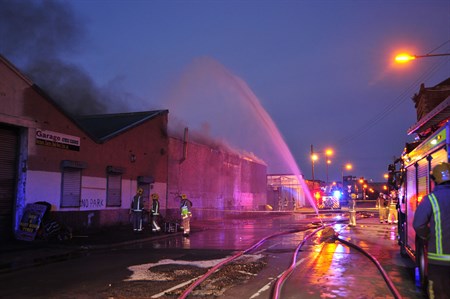 Firefighters battled for four hours through challenging conditions to bring a blaze at a garage under control.

Crews were unable to enter the heavily smoke-logged building in Glasgow’s Clyde Place.

It contained up to 50 cars packed together which were potentially loaded with fuel and other hazardous substances.

Firefighters managed to prise open a roller shutter entrance. They also attempted to remove panels of the metal roof to gain access from above.

This allowed them to turn powerful water jets onto the flames to contain the fire and prevent it from spreading.

The crews then used thermal imaging cameras to identify hot spots which were thereafter actively targeted.

This created greater visibility and firefighters were eventually able to find a safe path through the middle of the premises – and extinguish the source.

The Scottish Fire and Rescue Service had been alerted to the blaze at 2.36am on Wednesday, 6 July.

There were five crews in attendance at the height of the incident – including Polamdie, Calton, Cowcaddens and Yorkhill - as well as a forward control unit from Milngavie as well as an aerial rescue pump. 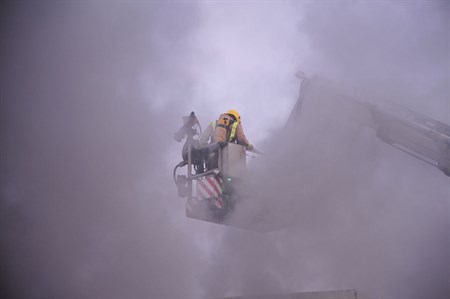 Police Scotland, Network Rail and Scotrail were also called to the scene alongside building control.

He said: “This was a potentially hazardous incident with 40 to 50 cars packed tightly which could contain either petrol or diesel.

“The smoke was dense and acrid. It was clear that something was on fire but we did not know what it was upon first arrival.

“The decision was made that it was too high a risk for firefighters to enter those premises so we fought the fire externally.

“That can be quite difficult.

“We opened the roller shutters and tried to get through the roof to get water onto the fire. We contained it and prevented it from spreading to nearby buildings.

“We then used thermal imaging cameras to hit the hot spots - which allowed us to gain more visible areas and find out some more information about the building itself.

“This allowed us to find a safe route into the building.”

He added: “It was very challenging but the fire was extinguished within four hours. The crews did a really good job and helped to keep the community safe.”

A joint investigation between the SFRS and Police Scotland into the cause of the fire is currently underway.