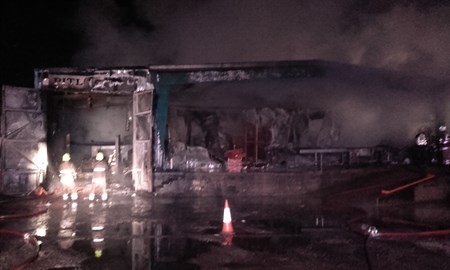 Operations control received the call at 10.33pm about a fire at Gordon Tyres in the town’s Ferry Road.

Appliances from Dunkeld, Aberfeldy, Pitlochry, Perth and Dundee were involved in the incident. The Command Support unit from Blackness Road in Dundee was also in attendance.

The fire, involving a 20m x 20m single-storey building, was split into four sectors by crews and they used three main jets to extinguish the blaze.

The last appliance didn’t leave the scene until 4.10am. An appliance from Pitlochry is returning to the scene today.

Station Manager Alex McCutcheon said: "The crews worked tirelessly in demanding conditions to stop the fire spreading to neighbouring domestic properties and to bring the fire under control.

"SFRS fire investigation team will be at the scene today to carry out a joint investigation with Police Scotland to ascertain the cause of the fire. Thankfully no one was injured."