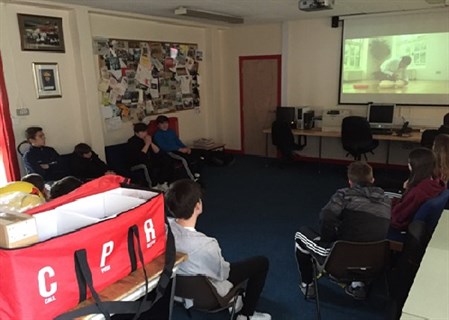 Pupils from Montrose Academy have been learning one of the most important lessons they might ever learn – how to save a life.

A joint community partnership between Scottish Fire and Rescue Service (SFRS) and Montrose Academy saw pupils take part in the Young Firefighters Programme, to learn potentially life-saving CPR skills as well as listen to firefighters speak about fire safety in the home and the associated hazards and risks.

All subjects were covered through theory lessons and practical exercises. On the final day of the four-day course the pupils picked up arguably their most important lesson, as firefighters used first-aid kit donated by the British Heart Foundation to pass on vital CPR skills, including how to attempt the resuscitation of a casualty.

According to the Scottish Government, around 3,500 people in Scotland have an attempted resuscitation each year because they have suffered a cardiac arrest outside of hospital, but only 175 people (5%) survive (1). The aim of Government’s Out of Hospital Cardiac Arrest Strategy, and its accompanying campaign Save a Life for Scotland, is to increase survival rates so that an extra 1000 lives are saved by 2020.

“Emergency life support skills really do save lives could prove to be one of the most important training sessions the pupils have ever undertaken.

“This was a great chance for us to pass on vital skills that could make the difference between life and death.”

He added: “The pupils were fantastic throughout the CPR presentation and you could see they were determined to put what they had been shown into practice.”

“Running these courses allows the children to take part in dealing with an emergency situation, showing them best ways to react and all the hazards involved.”

Anyone can arrange to visit one of the Service’s 356 fire stations in Scotland and learn CPR on a specialist training kit provided by the British Heart Foundation. People or groups are encouraged to contact their local fire station to arrange a suitable time. Firefighters can also bring the kit out of the stations to visit local schools or community groups and pass on their expertise.