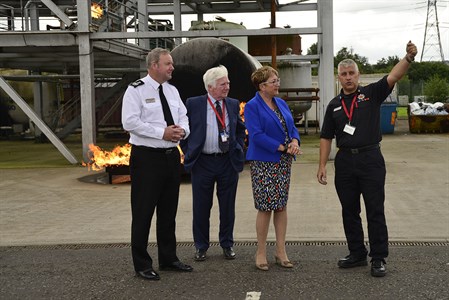 Chief Officer Alasdair Hay, chair of the SFRS Board Pat Watters and Ms Ewing hear from Watch Manager Scott Smith during the tour

The Scottish Fire and Rescue Service is held in the highest regard by Scotland’s communities, Annabelle Ewing, Minister for Community Safety and Legal Affairs said today.

The minister also congratulated the SFRS on its transformation into one single service.

And she told how she was looking forward to a tour of the "world-class" National Training Centre at Cambuslang with Chief Officer Alasdair Hay and Pat Watters who is Chair of the SFRS Board.

Ms Ewing spoke during the annual performance review meeting with senior officials and Board members on Tuesday, 9 August.

The Minister said: "I can’t think of any other group of public servants that are held in higher esteem than the Scottish Fire and Rescue Service.  The public remain forever in your debt.

"Today, is my first visit to the Cambuslang facility and I look forward to my tour.

"I really am looking forward to seeing this world-class facility.

She added: "The fire service has already delivered a large part of what was asked of it as part of a reform process and transformation into a single public service.

"Well done to every single person involved in the service for that result.

"I hope that I bring a fresh pair of eyes to the job to ensure that all the hard work that has gone into moving from eight services into one will continue – to see what further achievement can come.”

The tour followed the public meeting which is held so that the SFRS can account for its progress over the previous 12 months.

Mr Watters said: "Following our successful annual review with the minister, we were delighted to be able to then show her around this world class training establishment.

"That makes us all proud to be part of the SFRS."

The discussion covered a range of issues including the role of fire fighters in data collection for performance management, the SFRS approach to successful partnership working, the challenges in recruiting and retaining RDS fire fighters and the strategy for dealing with false alarms.

Questions from the public gallery included the pace of progress on harmonisation of pay and conditions and the ongoing changes to control rooms, as well how improved intelligence in real time will enhance the safety of frontline staff during incidents.