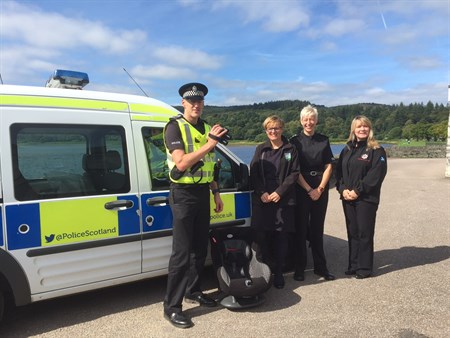 Scottish Fire and Rescue Service this week gave its backing to a local Police Scotland-led road safety initiative in Argyll and Bute.

Argyll and Bute Multi Agency Road Safety Group launched its four week local rural roads safety initiative, in advance of the national campaign which is due to take place between the 4th and 11th September.

This campaign is in response to a rise in the number of fatal and serious road traffic collisions this year. Priority locations will include the A83, A82, A85 and the A816.

Speaking on behalf of the group Chief Inspector Marlene Baillie said: “So far this year we have seen an increase in the number of people of who have been killed and seriously injured on our roads in Argyll and Bute.

“This causes real concern and the group is working hard to try and prevent such accidents occurring. As part of our response we will be engaging in a number of education, encouragement, engineering and enforcement activities in an effort to influence driver behaviour and keep our roads safe.”

She added: “There will and be an increased police presence at priority locations with officers using speed detecting equipment, patrolling in unmarked vehicles and engaging with drivers giving them road safety advice. There will also be young driver events, biker first aid training and car seat safety initiatives being run by our partners in Scottish Fire and Rescue Service and Argyll and Bute Council.”

Road safety remains a priority across all communities in Argyll and Bute and the partnership says it is committed to making every effort to address concerns.

Chief Inspector Baillie added: “However, there is also a responsibility on road users to ensure their own safety by not engaging in dangerous driving activity such as speeding, mobile phone usage or overtaking without safe clearance.

“All road users should adhere to the speed limits, take cognisance of the road conditions and pull over both on single track and main roads, if they are aware of someone following close behind.

“Driver frustration is a repeat causal factor in accidents and something that can be avoided if people just take some time to think about how their driving may be affecting others. We hope that over the next four weeks in the run up to and during the national rural roads campaign we will have made a significant contribution to the road safety agenda and reduced the number of accidents on our rural roads in Argyll and Bute.”