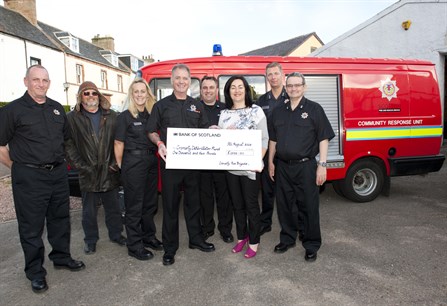 The fundraising efforts of community members in the Ross-shire village of Cromarty have resulted in the purchase and installation of three public access defibrillator units.

Residents have been raising money for a number of months to raise the cash for the units, which will provide the community with instant access to potentially life-saving equipment.

Cromarty is fairly remote and it can take time for emergency support to get there, so it’s a tremendous reassurance for those who may need the equipment that they will now be readily available.

The members of the local Scottish Fire and Rescue Service’s (SFRS) Community Response Unit were keen to help the cause and arranged a quiz night during the Annual Gala week. The evening was very well supported, with 29 Teams participating, throwing coins at the whisky bottle, bidding in the whisky auction and buying large numbers of raffle tickets.

Overall, the efforts of the CRU raised over £1005, which they have handed over to the Cromarty and District Community Council.

The aim is to have the defibrillator units in the town before the end of the summer.

Late last year SFRS entered into a partnership with the British Heart Foundation which saw the charity donate CPR training kits to every fire station in Scotland.

The idea is to help build a nation of life-savers by offering communities the opportunity to teach themselves CPR. Anyone can contact their local firefighter and agree a date and time to use the self-teach DVD and manikin at one of Scotland's 356 fire stations.

The partnership is part of both organisations’ commitment to the Scottish Government’s Out of Hospital Cardiac Arrest strategy, which aims to save 1000 lives by 2020.

SFRS Station Manager Ricky Dibble, said: “We’d like to say a huge thanks to all those who attended the quiz, those who donated raffle prizes and to the CRU for all their efforts.”