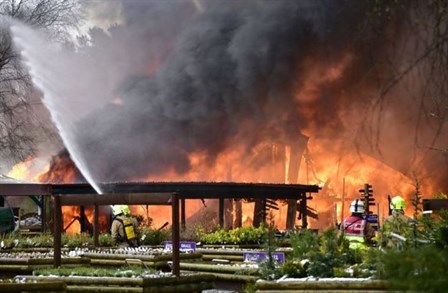 Above: Firefighters tackle the blaze near Grantown-on-Spey (PIC: Aaron Sneddon)

More than 40 firefighters are battling a blaze at a garden centre in the Highlands.

Scottish Fire and Rescue Service (SFRS) crews have been using multiple high-pressure jets to tackle the flames, which tore through the premises near Grantown-on-Spey this morning (Friday 29 April).

No-one is believed to be hurt as a result of the incident, which began around 8:20am and has destroyed much of the site.

In a sign of the scale of the operation, SFRS officers requested 20 replacement breathing apparatus cylinders to replenish those depleted since firefighters reached the scene.

Station Manager Robbie MacDougall, the incident commander, said: “Our crews have completely surrounded the fire but the operation is likely to continue into this evening.

“Flames spread rapidly through the building and the fire was already very well developed when first responders arrived.

“Our teams have been working extremely hard to protect adjacent maintenance buildings from the intense flames and we will continue the firefighting operation until it’s brought to a safe conclusion.”

Due to large amounts of smoke in the vicinity local residents have been advised to keep their windows and doors closed as a precautionary measure.

SFRS has five appliances and four specialist support vehicles at the scene, including personnel from Grantown, Aviemore, Inverness, Kingussie and Nairn fire stations.

Multi-agency meetings have taken place and police officers are controlling access to the site to ensure the safety of the public.

The cause of the incident is not yet known. Specialist officers from the SFRS Fire Investigation Unit will attend to conduct a joint investigation with police after the conclusion of firefighting operations.

No further information regarding the incident is available at this time but updates will be issued in due course.