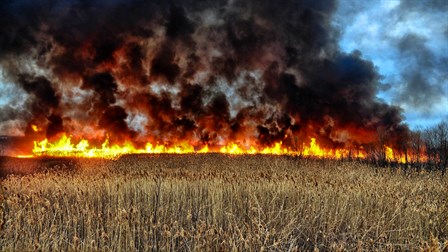 Above: Stock image of a wildfire in Scotland (does not depict this incident).

Firefighters worked for over five hours to tackle a large wildfire burning on rough terrain in south west Scotland.

As three-foot high flames blazed across more than 600m of grassland Scottish Fire and Rescue Service (SFRS) crews battled to protect a nearby forest from the moving threat.

Around 15 firefighters used handheld beaters and a high pressure jet to extinguish the flames.

The incident happened between Barrhill in South Ayrshire and Newton Stewart in Dumfries and Galloway on Tuesday afternoon (26 April).

First responders reached the scene shortly before 1:20pm and the fire was brought under control by 6:30pm.

The incident is not thought to have been deliberately started but SFRS is clear it needs the public’s help to reduce the number of wildfires that do strike.

Dry conditions at this time of year can easily result in wildfires that damage the environment, devastate wildlife habitat and threaten homes and businesses.

Anyone who sees someone acting suspiciously, recklessly or irresponsibly in the countryside should contact Police Scotland on 101.

Information can also be passed anonymously by calling Crimestoppers on 0800 555 111.