A disastrous and destructive fire took place here in the 24 properties comprising Queens Court. During the extensive operations Fireman James Bruce of the Glasgow Fire Brigade was killed whilst firefighting. 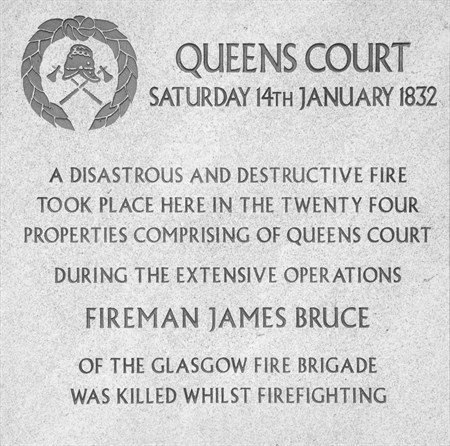 Fireman James Bruce died when he fell from the head of a ladder at what was described as "one of the most destructive fires that has occurred in Glasgow for a very long period of time."

The owner of the affected property offered the firefighters £5 (a large sum at the time) if they would retrieve his safe from the ruins.

This was done, but the men agreed that the widow of Fireman Bruce be given the reward money.

The main Glasgow Fire Brigade station at this time was on Bell Street in the city's Candleriggs area, where there were three candleworks.

Like all firemen in Glasgow at that time, Fireman Bruce would have been a volunteer, who turned out when required, from home.

He wasn't attached to Bell Street Fire Station as such, but was on the list of firemen who were summoned by the sound of a drum.